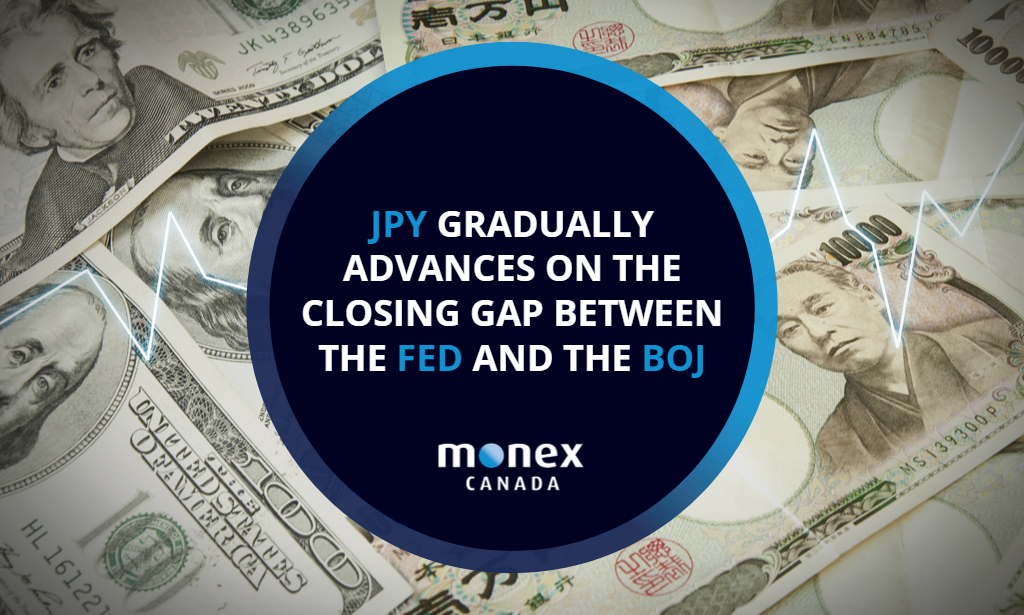 JPY was among the best performing currencies last week, following both the Fed and BoJ meetings and the election of Yoshihide Suga as the successor Prime Minister to Shinzo Abe.

The BoJ brought no policy moves forward, but took an upbeat tone on the economic outlook. In contrast, the Fed’s move towards strengthened forward guidance moved it a step closer to the BoJ’s ultra-accommodative policy stance, raising the prospect of a structurally smaller difference between US and Japanese yields.  On the Japanese side, in contrast, the yield curve shows hints of bear steepening as long-term yields increase at a faster rate than short-term ones. These moves reflect slightly better prospects for the Japanese economic recovery, along with back-loaded pressures in the JGB market due to significant long-term debt issuance.

With the BoJ remaining somewhat constrained in its scope for further monetary easing, additional loosening by the Fed has the potential to strengthen the yen as a result.

USDJPY traded lower last week although there are reasons to believe the pair has yet to reflect developments in the fixed income and monetary policy space. This means that the yen has further room to gain against the dollar from a purely yield-based perspective. The BoJ seems comfortable with the current stance of monetary policy and no further action is foreseen at the moment. We believe that the marginal tool of choice for the BoJ is the expansion of bond purchases. However, the extent to which additional QE in Japan could soften the yen remains a question, after the Fed set the tone for a protracted asset purchase program and a long period of negative real interest rates. With a structurally low inflation profile, the BoJ is nowhere near being in a position to begin normalising monetary policy, let alone before the 2023 benchmark set by the Fed.

The resulting currency appreciation from monetary policy setting may, however, raise some concerns within the policy board as the yen gradually approaches its 10-year MA in real terms against a broad trade-weighted currency basket. The new Prime Minister in particular, is poised to exert some influence in this direction, with Suga being particularly linked to explicit currency concerns in the past. The consensus call for the BoJ to engage into currency targeting hovers around the 104 level in the USDJPY pair, a level that could continue to be tested by markets on the back of a weaker dollar and faster recovery in Asian economies. 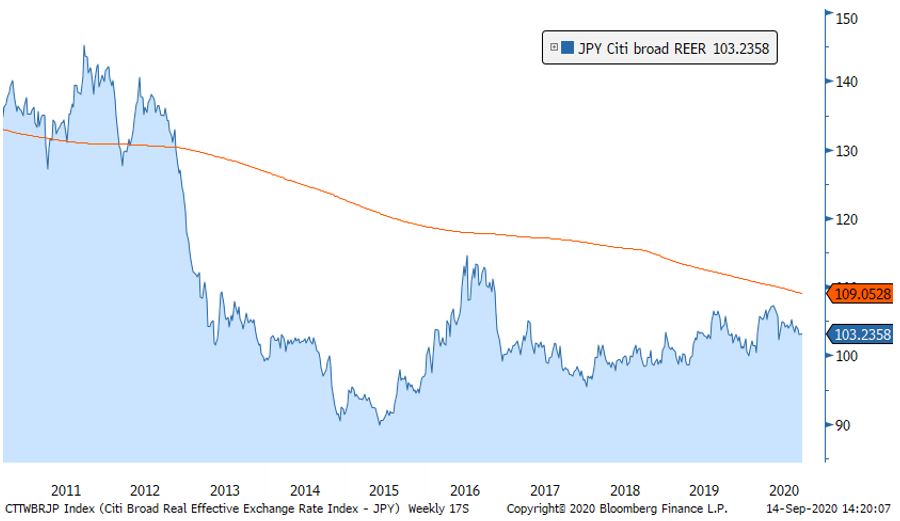 With most cards laid out already on the macro policy front, an interesting area of attention for JPY is what initiatives the new administration could promote in order to steer Japan out of its worst recession in decades.

Being a faithful follower of the Abenomics heritage left by his predecessor, fiscal and monetary stimulus will continue to be central to Suga’s agenda.

However, with the largest public debt to GDP ratio among major developed economies already accrued by Japan and aggressive monetary easing in place, there is little else Suga can do except address necessary structural reforms in the country. Tackling administrative inefficiency and deregulation could be the first areas of action along with further labor market reforms. Suga has also vowed to seek more competition in the phone industry and has hinted the need for consolidation of local banks. Although structural reforms are unlikely to prove a game changer for the yen in the near future, they do align to the slightly optimistic view we hold for the currency in the medium term. Enjoying ample political capital inherited from Abe, Suga is set to consolidate support to gain traction on reforms. With little more than a year until the next elections, he might even want to face early elections in order to assure a clear and long-lasting mandate to his administration.

DISCLAIMER: This information has been prepared by Monex Canada Inc., an execution-only service provider. The material is for general information purposes only, and does not take into account your personal circumstances or objectives. Nothing in this material is, or should be considered to be, financial, investment or other advice on which reliance should be placed. No representation or warranty is given as to the accuracy or completeness of this information. No opinion given in the material constitutes a recommendation by Monex Canada Inc., or the author that any particular transaction or investment strategy is suitable for any specific person. The material has not been prepared in accordance with legal requirements designed to promote the independence of investment research, it is not subject to any prohibition on dealing ahead of the dissemination of investment research and as such is considered to be a marketing communication.