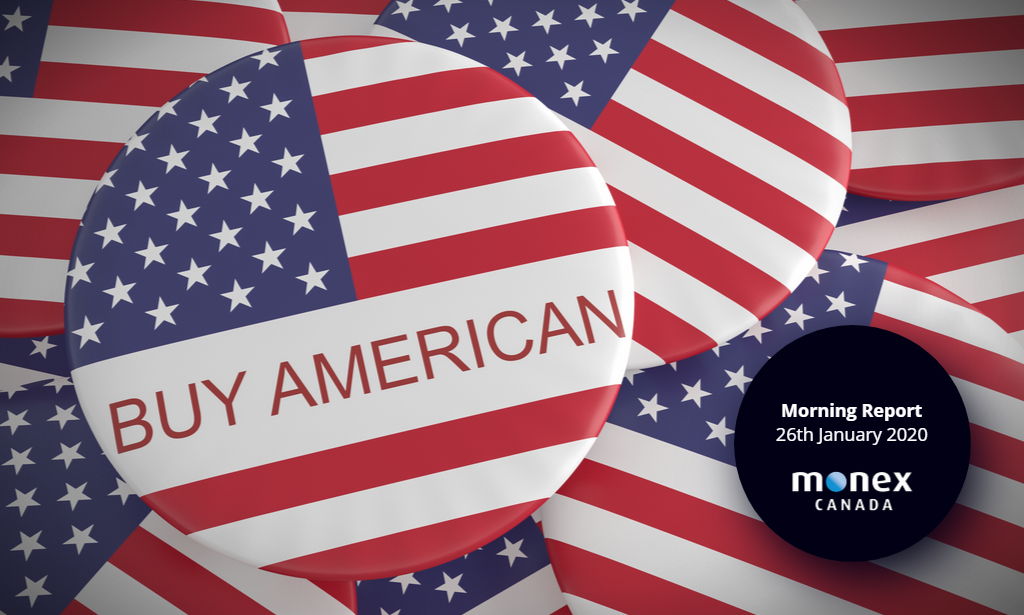 The loonie failed to hold onto early gains in yesterday’s trading session as oil prices plunged at around 16:00 GMT, pushing the Canadian dollar back into the red over the course of the day. The loonie now sits over a percentage point lower from Thursday’s 33-month high, with concerns elevated over President Biden’s “buy American” plans remaining a focal point for investors. Little new information regarding US and Canadian relations has been presented since Biden’s call with Trudeau over the weekend, with Chrystia Freeland stating that it will be a priority for talks scheduled next month with the new administration. Yesterday also saw Statistics Canada revise up its December unemployment rate from 8.6% to 8.8% and employment was found to be 18.485m compared with 18.553m initially reported. Little data is scheduled for today ahead of Thursday’s CFIB business barometer for January, pushing the loonie’s focus back onto global risk sentiment.

With Asian equity markets closing lower, the risk-off tone was set this morning for FX markets. Sterling is taking on water for this reason as Boris Johnson is set to meet senior ministers and officials to decide whether to use hotels to forcibly place travellers in quarantine upon arrival to the UK. Similar policies have been carried out in New Zealand and Australia and have proven effective in controlling the spread of the virus thus far. This morning’s data didn’t help sterling’s case eiter, with the economy shedding 88,000 jobs in the three months to November. This pushed the unemployment rate up to 5%, from 4.9% previously, but the true deterioration in the labour market is yet to be shown by the official data due to the Coronavirus Job Retention Scheme. Many employers continue to furlough workers using the CJRS due to it being a costless way of retaining workers, however, with the scheme set to expire in April, a further deterioration in the labour market data is expected in Q2.

The euro is taking on some water this morning as several narratives continue to weigh on the single currency while new headlines add additional risks. With both Pfizer and Oxford AstraZeneca facing supply issues, prospects of a swift eurozone recovery may have weakened while several eurozone countries consider tightened lockdown measures as the more infectious virus strains remain a threat. Brussels has moved to tighten rules on exports of vaccines outside the EU as the fallout escalates from AstraZeneca’s delay to deliveries that were planned over the coming weeks. Beyond that, Italian Prime Minister Giuseppe Conte informed ministers he will resign today. His resignation is seen as a tactical move to avoid a defeat in the Senate, allowing him to make his way back to head a new government by counting on President Mattarella to ask him to form another. In France, Finance Minister Bruno le Maire stated France is unlikely to meet its 6% growth target this year if it imposes another nationwide lockdown, which the nation is considering currently, while German Chancellor Angela Merkel said yesterday the pandemic management slipped out of control. The resignation of the Italian PM, the ongoing virus concerns and questions around the EU vaccine rollout are likely to dominate euro price action today while the currency continues to take cues from broader moves in risk sentiment. In the absence of a vibrant data calendar, comments from European Central Bank members De Cos and Centeno will grab attention today.

The dollar showed a decent bid in the afternoon of yesterday’s trading session as the global risk environment remains tentative. Questions around the efficacy of vaccines and their distribution have tempered the market’s optimism of an aggressive economic recovery in 2020 and a strong risk rally. In this light, the dollar continues to find support despite analysts’ earlier expectations of a cyclical dollar decline in 2021 on vaccine optimism. For US markets, the focus remains on Washington and the evolution of the $1.9trn fiscal stimulus package. Joe Biden is reportedly looking to reshape his initial proposal in order for it to garnish bipartisan support ahead of Donald Trump’s impeachment trial on the week fo the 8th, however, the new President hasn’t ruled out pushing his stimulus plans through the lengthier reconciliation process which only requires a simple majority in both chambers. Yesterday saw Janet Yellen confirmed as the first Treasury Secretary by the Senate, with Antony Blinken’s nomination for secretary of state to be voted on today.

DISCLAIMER: This information has been prepared by Monex Canada Inc., an execution-only service provider. The material is for general information purposes only, and does not take into account your personal circumstances or objectives. Nothing in this material is, or should be considered to be, financial, investment or other advice on which reliance should be placed. No representation or warranty is given as to the accuracy or completeness of this information. No opinion given in the material constitutes a recommendation by Monex Canada Inc., or the author that any particular transaction or investment strategy is suitable for any specific person. The material has not been prepared in accordance with legal requirements designed to promote the independence of investment research, it is not subject to any prohibition on dealing ahead of the dissemination of investment research and as such is considered to be a marketing communication.